If you haven’t read my post, “Meet Belle,” you should definitely go check it out before reading this one! It will help set the stage for my excitement from this week. 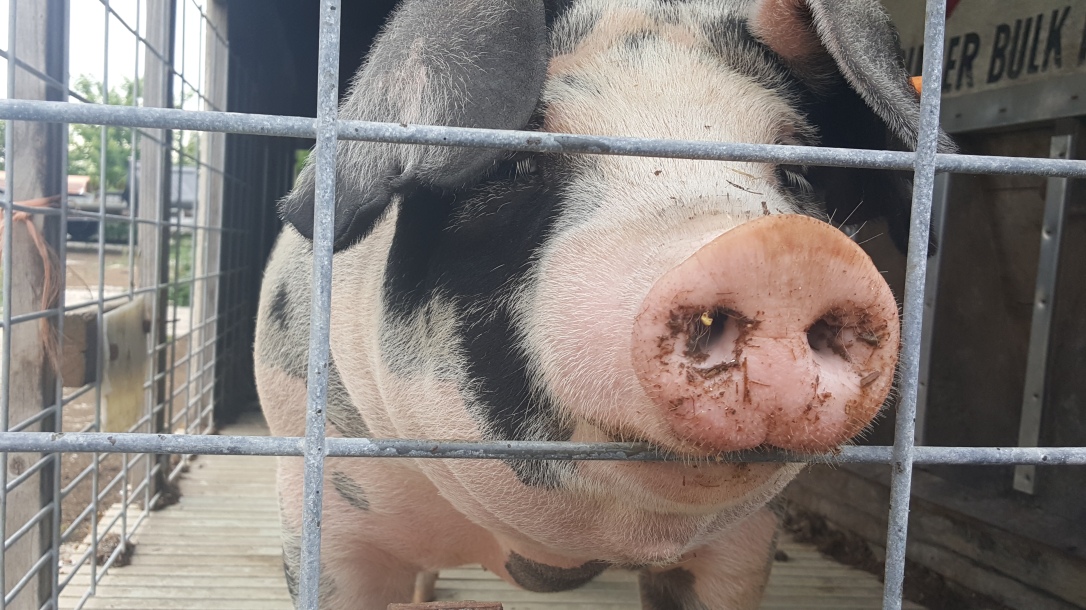 I’ve been dying to write this post since Wednesday because my beautiful Belle finally had piglets! I almost cried when I discovered them! She only had two, but I was perfectly happy with them since I didn’t think Belle was bred at all.

When I bought Belle in July, my main intent was to breed her. Not many people right around us breed Spots, so I was hoping to not only keep some for myself, but to sell a few as show pigs too. (Plus, Spot piglets are the cutest, and I just had to see some for myself!)

So we ordered semen and got Belle bred on October 5th and 6th. We typically try to give our pigs two doses to ensure that they settle. Pigs are pregnant for 3 months, 3 weeks, and 3 days, so we knew to expect piglets somewhere around January 27.

But in early December, Belle must have slipped and hurt her back leg. We noticed she was limping a little, so we moved her out of her group pen and back into her individual pen in the portable house. Pigs will play and fight, so we hoped to speed up the healing process by separating her from the other gilts.

By January, she still wasn’t getting any better. She would limp around, and refused to put weight on her leg even when standing still. We started to wonder if she had something wrong with her hip, so we finally made the decision to call the vet.

Now keep in mind, by this time I was becoming a hot mess. Not only was my first and only pig hurt, but she wasn’t showing any signs of pregnancy. And when our pigs can’t produce, they get shipped. It sounds sad, but livestock are an investment, they aren’t meant to be pets. We raise our pigs for food and to sell, and if we can’t do either of those, we must make the difficult decision to get rid of them.

I was really nervous the day the vet came to look at Belle. Even though William reassured me time and again that we wouldn’t have to get rid of her, I prepared myself to hear the vet say she was helpless.

He couldn’t be sure, but his best guess was one of two diagnoses: she either pulled a leg muscle, or she had nerve damage in her hip. A pulled muscle can be easily fixed with medicine, but nerve damage meant bigger problems. On one hand, we could give her a steroid to help the nerves, but that would cause her to abort her pregnancy. On the other hand, we could forego the steroid, but without feeling in her hips, she was bound to have a difficult time farrowing.

We decided to try giving her a muscle relaxer to see if it helped. The vet told me to give her the medicine over the course of 3 or 4 days. If she healed up, it meant she had only pulled a muscle. If the medicine didn’t help, it most likely meant nerve damage.

4 days later, Belle still wouldn’t put any weight on her leg. By this time, she was only a couple weeks out from her due date, and still wasn’t showing any signs of pregnancy. I kept telling myself she would magically have babies, but I knew it was a bit of a lost cause. We needed her pen to house a boar we were getting back from some friends, so we moved Belle into a pen in the barn and continued to hope she might start walking better soon.

Now if you follow me on Snapchat, I’m sure you noticed I made sure to check on Belle each night after moving her into the barn. She loves belly rubs, so I’d sit down with her, rub her belly, and of course, take lots of selfies. I started to notice her underline was swelling up a little, but was pretty sure my mind was just tricking me into thinking she was still pregnant.

But when we got home from Young Leader Conference last weekend, we noticed her underline was looking especially huge! Belle was looking pregnant after all! But now came the question of when she was due. If she was pregnant from the time we bred her, she was already 3 days overdue (which was strange, since she only just started showing any signs of her pregnancy). But we didn’t put a boar in with her until almost a month after we bred her, so her boar-bred due date was still a long way out.

We figured we should get her moved into a farrowing crate just in case, so on Wednesday we went out to the barn to do chores and move pigs around. When I got to Belle’s pen I noticed a little group of spots next to her! She had babies! Oh my gosh I jumped and smiled and yelled for William to come over. I felt like a little kid on Christmas morning! 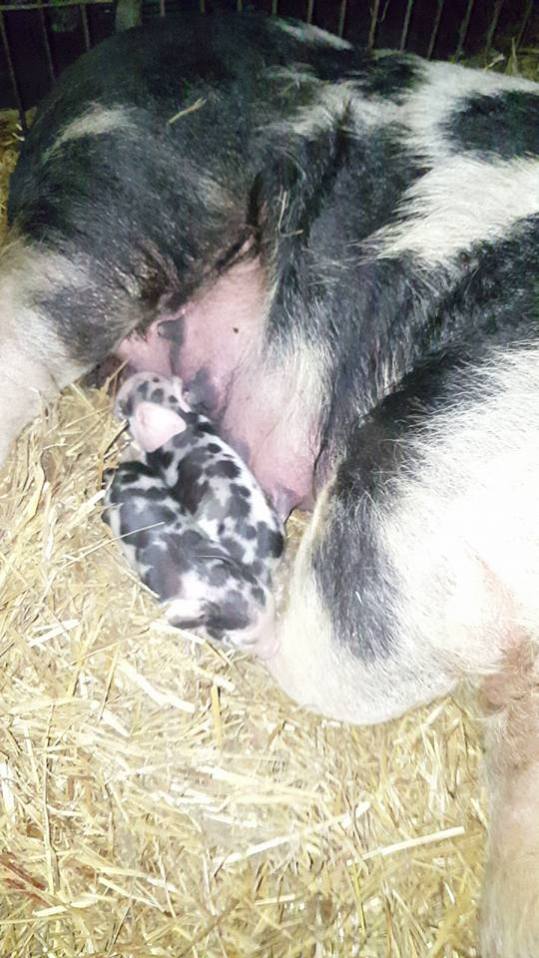 I was especially excited that she had managed to have them on her own. I was really worried that her hip would cause her to struggle giving birth, but by the looks of it, she did just fine!

We didn’t see any afterbirth, but she seemed to be done farrowing. And like I said, 2 piglets are better than 0, and I was so happy! She did just fine farrowing in an open pen, but we went ahead and moved them all into a crate anyway. Belle’s hurt leg causes her to lose her balance really easily, and the bars on the crate help to slow her down so she doesn’t flop onto her piglets. The sweet babies are now 4 days old, and they are thriving and playing, and oh boy are they the cutest things I’ve ever seen!

Ok, enough of my rambling! Let’s get to those Sunday Snaps! I took lots of pictures of the other pigs this week as well, but today is all about my two perfect Spot gilts! Enjoy! 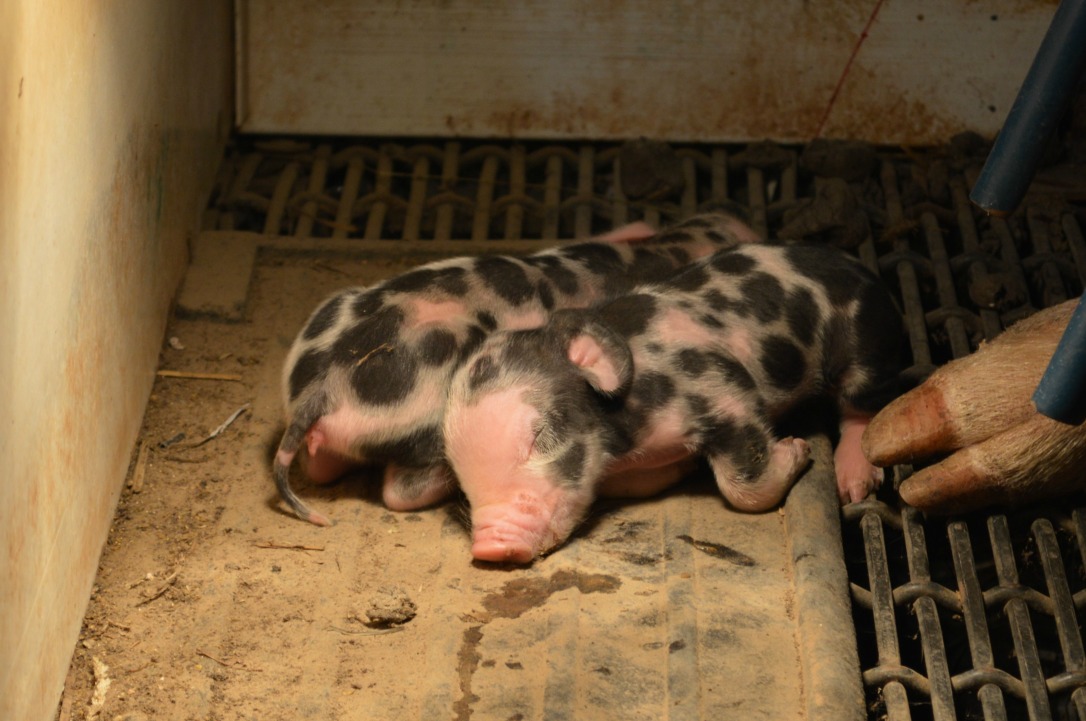