Lately I have taken up the hobby of making pies. Up until about 3 weeks ago, I had never made a pie, aside from maybe those pudding pies my Grandma Blanche liked to whip up during summer vacation. But as far as rolling dough, following a recipe, and using a real pie dish (not those disposable foil pans), I’ve just never done it.

I have a weird relationship with baking. If someone asks me if I like to bake my response is little more than a shrug of the shoulders. Kind of an “Eh, I have a few recipes I like, but I rarely make them,” sort of answer.

The truth is, I don’t really like the act of baking. (Not to mention having to clean up afterward!) On top of that, I don’t have a major sweet tooth. I’d pick salty fries over dessert any day.

But what I do love about baking, is how it makes other people feel.

There’s nothing better than hearing, “oh boy!” as William enters the kitchen and sees a pie sitting on the counter. Making someone a hearty dinner or baking them a delicious dessert is the best way to show them you care.

So with that said, I’m determined to master the art of making pies. Since I didn’t grow up baking, I don’t have any tried-and-true recipes to follow and instead I’m becoming best friends with Pinterest. Disclaimer: I’m not quite baking yet. I’m sticking to no-bake cream pies for now. Baby steps, people. 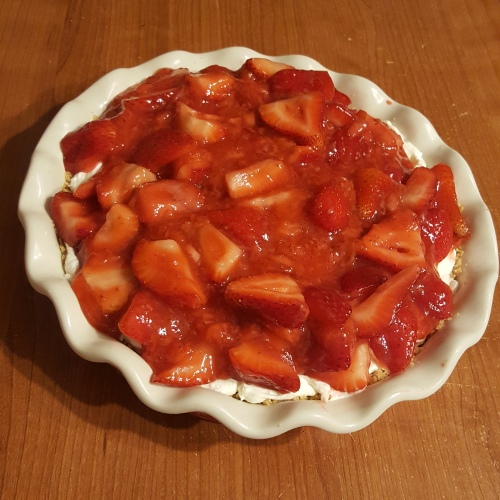 The first pie I attempted was a Strawberry Cream Cheese Pie. This poorly lit cell phone picture doesn’t do it justice. It was delicious! It took me back to Sunday’s after church, sitting at the Dutch Diner in Tampico, enjoying lunch with family. Unfortunately the restaurant has since closed, but one taste of this pie brought back all of the great memories we shared there!

You can find the recipe over at Sugar Spun Run. Sam uses freshly picked strawberries for her recipe, and even though my store bought berries did just fine, she may have just convinced me to work a little harder on my garden from now on.

The pie starts with a graham cracker crust, which I also found over on Sam’s blog. Then I filled the crust with a whipped cream cheese layer, and topped it with strawberries in a strawberry sauce. I made everything from scratch, which is my goal as I continue learning how to make different pies. I’m a bit cream cheese obsessed, so if I were to change anything, I might make a slightly bigger cream cheese layer. But over all the ratio of rich cream cheese to sweet strawberries was perfect.

Then I moved on to this beautiful creation:

Today I skipped the fruit and went right for my favorite candy- Reese’s Peanut Butter Cups! This pie is still chilling in the fridge, so I haven’t actually tasted it yet, but oh my it is going to be rich!

I found the recipe for this one over at Mandy’s Recipe Box. Like the pie above, it’s filled with a fluffy cream cheese layer. I wasn’t kidding when I said I’m in love with cream cheese. I’d eat it with a spoon if it was socially acceptable.

I started with an Oreo crust that I found on a different blog called Love to Be in the Kitchen. You can find the super simple recipe here.

Obviously I can’t review this one yet since I haven’t tasted it. I can say, however, that it may end up a little sweeter than intended. I missed the direction where it said to divide the powdered sugar, and I may have accidentally almost doubled the powdered sugar in the recipe. Whoops! Oh well, live and learn. And also send your blood sugar levels through the roof. Worth it.

I’m so excited to continue this pie making journey. William is excited for the day I finally give in and make a lard pie crust. (Send recipes if you have them!) In the mean time, I’ll keep learning and taste testing, and maybe even become an amateur food blogger in the process. Hey, farms = food, so recipes may just fit in perfectly here at Farmer’s Grace. Stay tuned!