I can’t believe it has taken me over a month to share this here, but I made another exciting purchase!

I bought an alpaca! 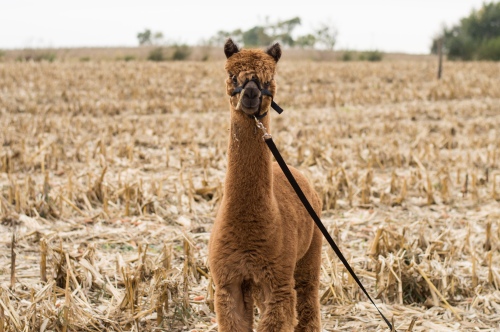 Jeffrey is a 1 1/2 year old Huacaya alpaca. He is super fluffy, extremely friendly, and loves snuggles!

As with most of my purchases, buying Jeffrey was a bit of an impulsive decision. William made the mistake of showing me his picture on a Facebook page, and I fell in love. (This is starting to sound a lot like the time I bought Belle. It always starts with William accidentally telling me where to find an animal!) At first it was sort of a joke, but of course once I saw him, I couldn’t stop thinking about him. I mean, he was only $175… That’s a steal, right? 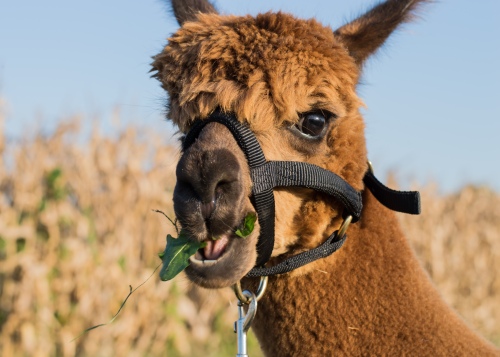 After a week or so of toying around with the idea of buying him, I finally broke down and messaged the lady who had him for sale. She and Jeffrey were about an hour and a half drive away, in Galesburg. We had a vet visit for the pigs scheduled that week, and our vet happens to be about halfway between Walnut and Galesburg, so we decided to meet.

However, the timing wasn’t quite right, and unfortunately our plans fell through.

About a week later, we tried to make plans to meet again. But between me needing William’s help to pull the trailer, and her needing her grandson’s help to pull her trailer, we just couldn’t get our schedules to line up.

I finally messaged her and told her how much I appreciated her patience, but rather than continuing to go back and forth, I was going to have to pass on Jeffrey. We couldn’t find a time to meet halfway, and William had weekend plans that kept him from being able to drive with me the full way.

I had already told a few people about Jeffrey, so I wasn’t the only one upset about not being able to get him. My mom may have been the most heart broken- now she wasn’t going to have a grandpaca. (I know, we’re all a little strange around here!)

I can’t remember exactly what changed, but whatever William had planned for the following weekend got cancelled, and he was finally able to go with me to pick up Jeffrey. I messaged the seller one last time, and we set a time to meet! 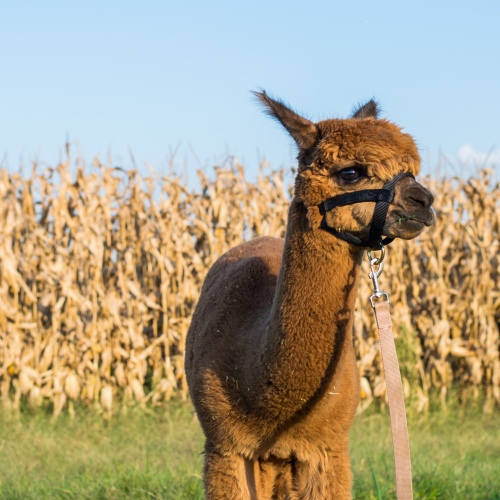 On Saturday, September 1st, we hooked up the trailer and headed for Galesburg. The seller was the sweetest lady and when we arrived she was waiting for us on her porch. She greeted us as soon as we pulled in, and took us to the barn. One of the mommas had just given birth a week before, so the herd backed away from us and huddled around the baby (or cria). But Jeffrey was curious and came right up to us. I knew right then it was definitely meant to be. We stood and talked for a while, asking some basic alpaca care questions, then finally loaded Jeffrey up and headed for home.

A month later, Jeffrey has become quite the star around the farm. He is now halter and leash broke, and loves going on walks around the yard. Jeffrey even has a new friend, Pepper the Sheep, so he doesn’t get lonely in the barn. He and the dogs are still warming up to each other, but for the most part, his transition to our farm has gone smoothly.

Jeffrey will be making plenty of appearances on my Instagram and Snapchat (@gracelynndale), but you can also keep up with his adventures over on his own Instagram by following @alpaca_jeff.